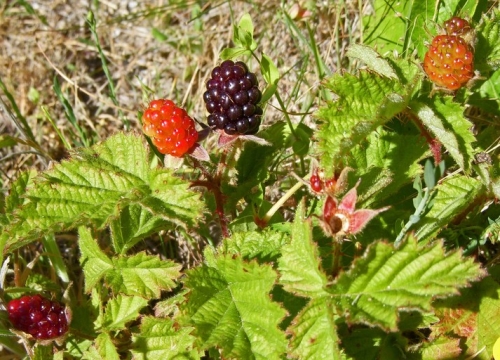 A favorite summer activity for many is swimming along Putah Creek, breaking every once in a while to munch on the blackberries that line the creek. It’s hard to resist the sweet flavors of a blackberry, but what kind of blackberries are along the creek?

California blackberry (or Pacific blackberry) is a species in the rose family that takes on a shrub or vine growth pattern forming dense brambles. Typically found in moist areas along stream banks throughout California, the range of the Pacific blackberry is from Baja all the way to Canada! The native blackberry fruits from mid to late summer and into fall. The plant is attractive to a wide range of wildlife from butterflies to bears.

Both Himalayan and California blackberries provide great food for wildlife. Their thickets form important cover and their flowers attract pollinators. Pacific blackberry usually doesn’t produce fruit until the second year after planting and is dioecious so only the female plant produces fruit. Due to the invasive nature of the Himalayan blackberry, it is often difficult to find the California native. The non-native blackberry has the ability to grow in a variety of different conditions- wet soils, dry soils, full sun, or complete shade- it’s not picky! Due to its vigorous spreading, Himalayan blackberry must be managed so as to not overtake or shade out seedlings of other native species like oaks, cottonwoods, or ghost pine.

Next time to pluck a blackberry from a vine along Putah Creek, take a second to see if its the California native species or the Himalayan blackberry! Either way, enjoy the sweet fruits, but remember to leave some for the birds!