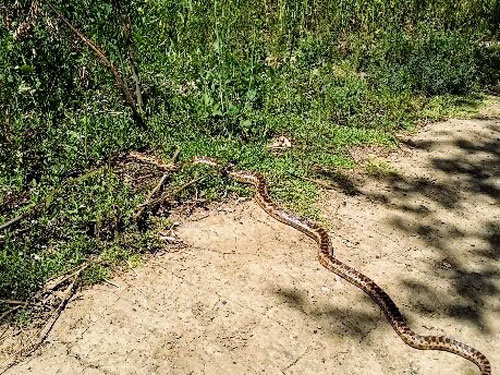 Putah Creek is home to one of the region’s largest snakes. The Gopher Snake (Pituophis catenifer catenifer) can attain lengths up to 8 feet long. Feeding primarily on rodents and other small animals this snake should be considered a good friend. They can make quite a show hissing and coiling but they rarely bite and will usually just try to get away from anything that disturbs them. Unfortunately, this harmless and beneficial species is very often killed out of fear that it is dangerous or that it is a rattlesnake.

They can be found throughout North America including all of the United States central and northern Mexico, and southern Canada in Saskatchewan, Alberta, and desert regions of British Columbia. North America including Primarily active during the day, they are also active after sundown on hot days. They are one of the most commonly seen snakes in our area. They are often observed crawling across trails (like this one along Putah Creek) and roads, especially in the morning and evenings when daytime temperatures are high. They are frequently seen around human dwellings, including suburban backyards, attracted to the rodents which roam our neighborhoods.

They are usually yellow, with brown, white, black, or sometimes reddish blotching. The blotching pattern is large blotches on top, three sets of spots on the sides, and bands of black on the tail. They eat by wrapping their body around and constricting their prey. They eat small mammals, such as mice, rats, gophers (hence the name), squirrels, and rabbits, as well as birds and lizards.

If you happen to see one of these impressive snakes offer a silent thank you for their services in reducing neighborhood rodents and watch it move on to its next meal.