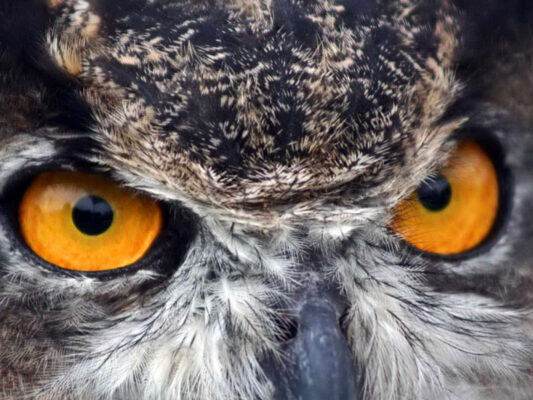 As fall approaches a certain noise will become more frequent around our creek: the deep hoot of the Great Horned Owl (Bubo virginianus). These owls are monogamous and create breeding pairs that defend their territory together with an aggressive hooting duet. Even though the female is the larger of the pair, she has a higher pitched hoot than the male. These mating pairs often mate for life, but it is uncommon for them to roost together outside of their mating season. This owl is quite the lazy builder and seldomly constructs its own nest. Instead they will take over the nests of other raptors, often Red Tailed Hawks, and use them to raise their young. They are also known to use cavities in dead trees as nests in more forested areas.

The appearance of the Great Horned Owl is iconic, but misleading. Although this majestic owl is known for its “horns”, it actually has no horns at all! What are commonly mistaken for horns or ears are actually just tufts of feathers called “plumicorns”. The exact use of these plumicorns isn’t well known, but one possible explanation is that they help the owl camouflage by resembling a broken tree branch. Their use might not be well known but they certainly make for one cool looking raptor! 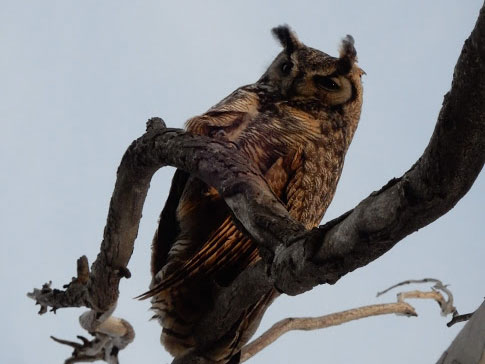 This well adapted predator is no picky eater. The Great Horned Owl feeds primarily on small mammals, but is also known to prey on reptiles, insects and even other raptors! Like many birds, an owl’s sense of smell is poorly developed which allows this owl to feast on some of our smellier native neighbors: skunks.

If you’re hoping to have your very own Great Horn Owl sighting, you’re in luck as they’re a very common species all across North America. Although they inhabit a great variety of habitats, ranging from the deserts of California to the tundras of northern Canada, you are more likely to find them where you find tall trees like those found along our very own Putah Creek. These tall trees are used as vantage points where the owl will scout out its prey and then dive on them from above. They’re mostly active at night but can be found hunting at dusk and even midday if food is scarce. Now is a great time to take a nice walk along the creek and keep an ear open for this creekside critter.