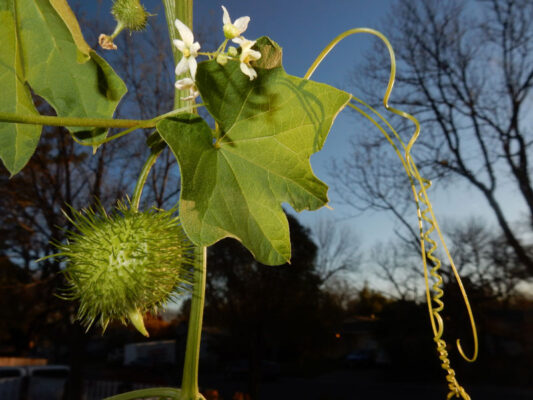 Our own native cucumber!

One of our earliest seasonally flowering species is a vine called the “Manroot” (Marah fabaceus). This perennial flowering plant vine is a native cucumber in the gourd family (Cucurbitaceae). It is found in western North America, extending from Southern Canada to Northern Mexico with most species adhering to within 300 km (~200 mi) of the coastal regions, but can also be found in select regions of Idaho and Arizona. The name “manroot” and “old man” are derived from the tubers which can have the shape and size of a man including lobes that with a little imagination can appear to have arms and legs. These body-shaped tubers can weigh in excess of 100 kg (220 lb). The word “Marah”, used for the genus, comes from a Biblical reference where the water was too bitter to drink, hinting of the bitter compounds found in its sap.

Numerous indigenous tribes valued this plant using the dried durable fruit as a scrubber and the sap as a soap, for catching fish and medicinally. Like many medicinal plants, at least some Marah species are toxic if ingested and deaths have been reported. The gourd was mashed for use as a poultice, the upper stalk was also mashed in water for use as a dip for aching hands, and burning the root created ashes rubbed on open sores. The tubers of some species contain saponins which can act as a natural soap and crushing the tubers in water have been described as a method to immobilize fish.The dried spiky fruits were sometimes used as a scrubber.

The vine begins its brief but spectacular growth spurt in early spring (January this year). The hidden tuber gives away its presence by literally shooting out stems that put on several inches or more per day. It may well be one of the regions fastest growing plants during this phase of its life. The spreading vines hurridly spew out bursts of leaves, flowers, fruits and coiling tendrils as they expand. The stout, often scabrous or hairy stems, rapidly climb up other plants or spread across the ground. In some cases, this impressive exhibition of life will festoon the branches of nearby trees, the extent of which hints to the size of the “manroot”. Our Marah has small white 5-petaled flowers with a bright yellow cluster of stamens in the center that attracts a variety of pollinators. The fruits are spherical and often 3 cm (1.2 in) across but can be up to 20 cm (8 in) long, and in many species (like ours), they are covered in long spines. Their leaves often have multiple lobes, with our species looking similar to a maple leaf. But both the leaf and fruit shape vary widely between individual plants and leaves can be particularly variable even on the same vine.

This plant is well suited to our region’s climate patterns with its verdant growth and flowering being well-timed to occur only during the moist 3-4 months of winter/spring. And then the entire green part of the plant quickly withdraws into the below-ground tuber to survive the dry heat of summer, leaving behind the brown withered remnants, as soon as the fruit dries it drops the marble-sized seeds into the leafy duff building up below the vine. For an ecologist, this is an amazing adaptation, but to a home gardener it may not be one of the more desirable display species, reserved for a space in the back where its contribution to a home garden is appreciated by those promoting diversity. However, as a restoration plant, Marah adds biodiversity where it provides for early pollinators and is a reliable drought-tolerant native plant. It is a challenging plant for seed collection in terms of obtaining the single large, hard-shelled mature seed that comes from each fruit because they pass from being immature one day and the next have already dropped into the leaf litter.

Our wild cucumber is on full exhibit along Putah Creek at this moment! If you hurry, you can watch this slow-motion fireworks display as it shoots up long stems that are now bursting into bright green leaves, twisting tendrils, and clusters of flowers that are bejeweled with bright yellow stamens that give way to the spiked-covered fruits. So if you want to meet the Manroot, get out there now because our Marah fabaceous ends its display soon, wilted and gone well before spring is over. Oh, and do not try to eat the “cucumber”, this species protects itself by being covered with spikes and is extremely bitter, which can means that it is toxic.