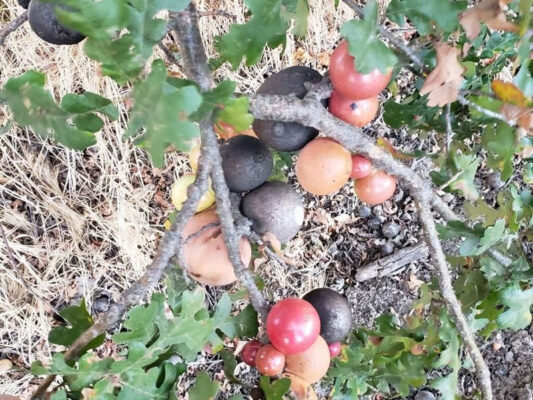 In the late summer and fall you’re likely to see spherical and other oddly shaped growths clustered on the branches of oak trees. They aren’t fruits, or even seeds; these are galls. Oaks, known to provide habitat for numerous animals, have been referred to by many native tribes as the “tree of life”. But there are some species that force oaks to grow an entirely new habitat to accommodate their young. These are ‘gall makers’. The champion of these parasites are a large family of tiny wasps, called Cynipids. Tiny female gall wasps will inject their eggs in the leaves or branches of oak trees (Quercus sp.) in the spring. As the larvae mature and develop, they secrete chemicals instructing the oak how to build their gall structure.

The variation in gall shapes and colors can often be used to differentiate the species that create them. Each wasp species has a distinct gall and is often named after the structure they create. Some galls resemble fruit, such as the oak apple gall produced by the California gall wasp (Andricus quercuscalifornicus, figure 1), others have more complicated and flamboyant structures, such as the spined turbine gall wasp (Antron douglasii, figure 2).

Because of the parasitic nature of this process, the oak tree is tricked into funneling nutrients to the gall to feed the larvae. This leaves the larvae with an abundance of food to feed upon and the safety from climate and predation to grow within.

Some larvae mature and emerge rather quickly while others will survive through the winter and emerge the following spring, where they will dig their way out and be on the lookout for a host oak to lay their own eggs, but some of the wasps will not be so lucky. As if it is not complex enough, the gall itself can then be parasitized by another group of Parasitoid wasps that specialize in injecting their eggs through the already formed galls and into the developing larvae. These secondary parasites will then consume the existing larvae and grow within the captured gall. This might remind someone of a partial script taken from Augustus De Morgan, in “A Budget of Paradoxes”: Great fleas have little fleas upon their backs to bite ’em, and little fleas have lesser fleas, and so ad infinitum. 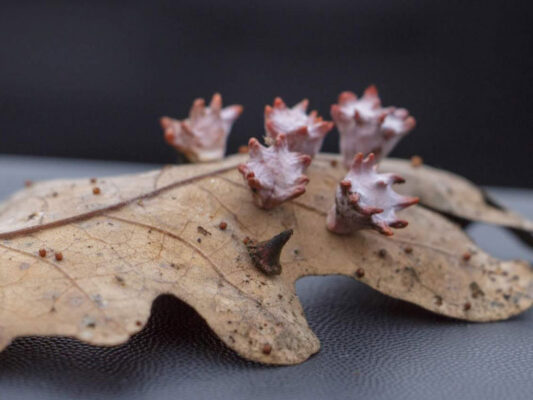 There are thousands of species of insects and even bacteria and viruses that induce galls. There have been over 700 species of gall wasps documented in North America, and more than 90 wasps in the Cynipidae family to cause galls on oaks in California alone. Galls are found on valley oaks (Quercus lobata), scrub oaks (Quercus dumosa), and blue oaks (Quercus douglasii). Other trees susceptible to galls along Putah Creek are white alders (Alnus rhombifolia), manzanitas (Arctostaphylos sp.), willows (Salix sp.), and gray pines (Pinus sabiniana).

The gall itself is high in tannins, making it extremely bitter, and unpleasant to consume. Historically, galls have been used by native tribes across North America to tan leather, make ink, and create medicinal concoctions to treat wounds, ulcers, and cataracts.

A wide variety of galls can be found along Putah Creek and it is worth noting that they are an indication of the complex interactions that take place in our ecosystems. Sometimes the galls may have a large funnel-shaped hole pecked in the side where a bird was able to pick out a tasty larvae.