Putah Creek is a productive and popular fishery for local and nationwide fisherman, but one of the most proficient and impressive anglers of Putah Creek is the osprey. Ospreys are very large and distinctively shaped. While originally considered a hawk, ospreys are now a part of its own separate family. Pandionidae, or members of the osprey family, have large, but slender bodies, long, narrow wings, and long legs. When seen from below, the wings of the osprey have a marked kink, giving an M-shaped appearance. Ospreys are generally brown on top and pale white from below. Their underwings are white, except for a prominent patch of brown at their wrists. Their heads are white with a broad stripe of brown through the eye. Juveniles have similar coloration to adults with the addition of white spots on the back and a buffy breast.

An osprey’s diet is almost entirely made up of fresh and saltwater fish. This diet is also known as piscivorous. Ospreys soar above the water and use their excellent vision to spot fish below the water’s surface. Once they spot their target, ospreys dive from above, sometimes completely submerging themselves underwater. Their effort is often not in vain as ospreys can have catch success rates as high as 70%. Ospreys also have specially adapted reversible outer toes, which allows them to grasp slippery fish with two toes in front and two behind. During flight, ospreys will line up their catch head first to prevent wind resistance. As opposed to the osprey’s excellent angling, bald eagles will harass other animals until they drop their prey. Thieving bald eagles can often be seen chasing ospreys out of their hard-earned catches. 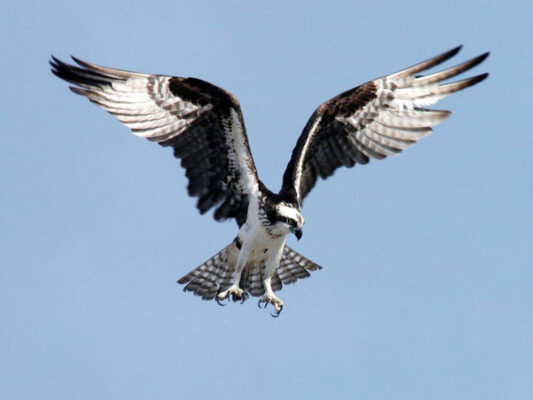 The osprey is not just a neighbor to the residents of Putah Creek, but to much of the world! Ospreys are known to have a cosmopolitan distribution, which means they can be found on almost every continent except for Antarctica. This wide distribution comes in part due to ospreys being mega migrators. An osprey can log up to 160,000 migration miles across its lifespan. As you can imagine, a bird as widely distributed as the osprey can tolerate a great variety of climates and habitat. Ospreys will mainly stick to areas with shallow waters with lots of fish. If you want to see an osprey along Putah Creek, try visiting the open, shallow waters of Lake Solano or the Yolo Bypass.

While this bird is of low conservation concern, that wasn’t always the case. Osprey populations sharply declined in the 1950s and 1960s due to the introduction of the pesticide DDT. This pesticide was used to prevent the spread of insect-borne illnesses in agricultural and household settings. Unfortunately, DDT had a drastic effect on bird of prey species. Ospreys that were poisoned by DDT laid eggs with extremely thin shells, causing them to be damaged during incubation. After the United States banned DDT in 1972, osprey populations have rebounded. Ospreys create nests on tree tops and snags out of bulky sticks, but also readily build nests on human made structures, such as telephone poles, channel markers, and nest platforms designed specifically for ospreys. These nest platforms were instrumental to increasing osprey populations after the DDT ban. The next time you visit Putah Creek, look to the skies and try to spot this aerial diving, fish-loving world traveler!