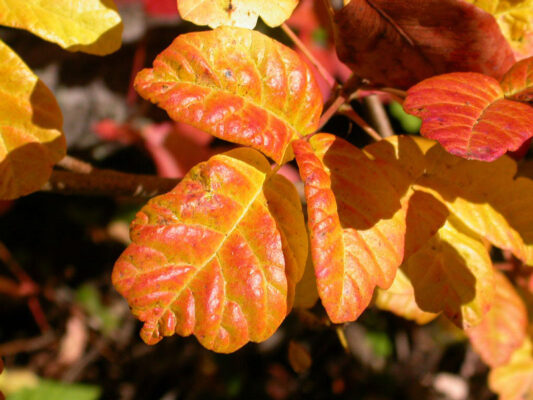 One of the most despised and misunderstood plants of the California landscape might just be Poison Oak (Toxicodendron diversilobum). Many of us have learned that contacting the toxin in the leaves and stems of this plant has earned it a well-deserved reputation of causing an inflamed skin rash accompanied by a sometimes severe and prolonged episode of itching. It can even be transmitted secondarily from contact with dogs that enjoy sniffing about off-trail. To make matters worse, it can be tricky to identify as its leaf color and shape could be deemed a disguise because it resembles that of a harmless oak, hence the name. The skin rash can vary dramatically from person to person with some showing no response while others may require a trip to the doctor for relief or even a stay in the hospital. Poison oak can be especially devastating when its smoke is inhaled, which is a mindful concern for firefighters. And to make matters worse, it is deciduous making it hard to identify in the winter months when it is leafless, which does not render it any less potent. This plant is the antithesis to the concept proposed by Michael Pollan in his book The Botany of Desire, as it is commonly, if not purposely, overlooked during native plant restoration efforts. For these reasons, avoidance and caution is best when it comes to poison oak.

This species has a wide geographic range, growing under a greater variety of soil conditions than most other species, where it can also tolerate shade or full sun exposure and grow from sea level up to 5,000 ft in elevation. Plus it can weave itself into the landscape in many ways, as it can climb walls and trees like a vine, grow low like a ground cover or take on the form of a shrub.

California indigenous peoples lived in harmony with Toxicodendron diversilobum. Several groups, including the Ohlone, prized its stems for weaving baskets. Wappo weavers dyed baskets with the sap. The Miwok, Kashaya Pomo, and Maidu made tattoo ink from its ashes. Sources show that poison oak could also be an ingredient in cooking. It seems some were susceptible to developing rashes from the plant and reportedly used soap plant (Chlorogalum pomeridianum), mugwort (Artemisia douglasiana), and yerba santa (Eriodictyon californicum) for treatment.

However, before you completely dismiss this species, the berries are a valuable food source for plenty of birds along the creek, such as mockingbirds, warblers, sparrows, quail, turkeys, waxwings. Deer and woodrats eat their stems and leaves, and the flowers attract pollinators. Interestingly, the toxin Urushiol, only affects primates. From a conservation standpoint, T. diversilobum can be quite useful by providing sustenance for plenty of species and could possibly be used as a method to exclude humans from select areas. Plus, the leaves contribute beauty in the landscape as the leaves go through a series of colors from light green spring leaves to the deep crimsons of fall, and red leaves can be found year-round.

This important plant does have its role in nature, but it comes with the reminder that humans weren’t meant to conquer every space. Stick to the trail and keep a bottle of Tecnu on-hand… just in case.