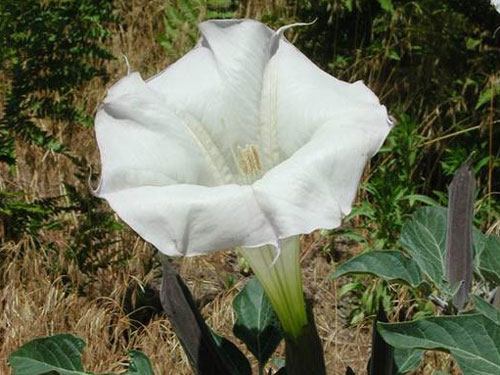 Jimson Weed or Sacred Datura (Datura wrightii) is a fairly common herbaceous perennial plant in the nightshade family (Solanaceae). Datura can be found from Mexico, throughout most of the Southwestern United States and up into the upper reaches of Northern California where it grows alongside roads, ditches, and sandy washes from 1,000 to 6,000 feet in elevation. It is fairly common along Putah Creek.

It is easily recognized by its large showy white flowers and dark green grayish velvety stems and leaves.  The flowers are the most striking feature, being sweetly fragrant white trumpets up to 20 centimeter (8 inches) long, often tinted purple, especially at the margin or in the throat. There are five narrow points spaced symmetrically around the rim. Flowers fully open in the evening and wither a few hours after sunrise the following morning; in cloudy weather or in part shade, they may open earlier and last longer. It can bloom from April to October. The leaves are broad and rounded at the base, tapering to a point, often with wavy margins. The fruit is spiny and conspicuous. Along Putah Creek the plants are shrub-like, sometimes attaining a height of 2-3 feet, but they can grow substantially larger depending on the local conditions.

Among the Zuni people, the powdered root of the Sacred Datura is given as an anesthetic and a narcotic for surgery. They would also apply a poultice of root and flower meal to wounds to promote healing.

Datura flowers are fragrant and are pollinated at night by hawkmoths which hover like hummingbirds and unfurl a very long proboscis that extends into the floral tube to reach the nectar. The Carolina sphinx (Manduca sexta), also known as the tomato hornworm, has a well-studied mutualistic relationship with Datura where it pollinates the flowers and also is the host plant to its larvae.

Like many ornamental or edible garden plants in the nightshade family (i.e. tomato, potato, tomatillo and the endless varieties of peppers and chilis), Datura is considered poisonous.  All parts of Datura contain toxic alkaloids with the seeds having the highest concentrations. Livestock and people have been fatally poisoned by ingesting the plant. After eating Datura leaves, one of our family guinea pigs took 3 days to recover. However, Datura is an attractive long-blooming, low-water garden plant that does best in well-drained soils.