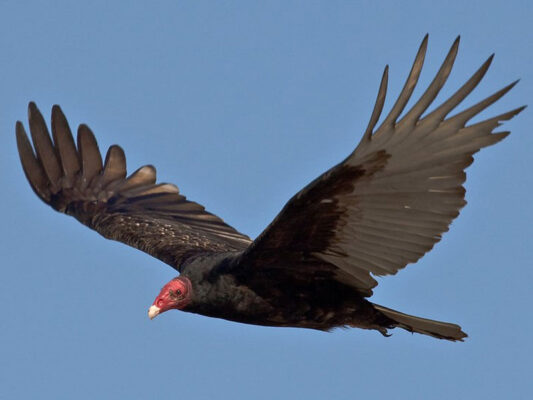 The sky above Putah Creek is home to an array of beautiful bird species, but there are definitely some that are prettier than others. In the land of beautiful bald eagles and ravishing red tailed hawks, the Turkey Vulture may seem a little — uh — ugly. Although it may not be a particularly good looking bird itself, the Turkey Vulture is a key player in the creek’s ecosystem and helps to keep the rest of our creek clean and beautiful.

Many carnivores will feed on corpses they come across, but few actively search them out and solely feed on them. The Turkey Vulture is special because it, like most vultures, feeds almost exclusively on carrion (dead meat). This dietary habit gives the turkey vulture a bad rap, but it’s also what keeps our ecosystem relatively disease and carcass free! The remains of other animals can be breeding grounds for dangerous, disease causing pathogens. If it weren’t for the turkey vultures the remains would be left to decay and spread disease, posing a health hazard to wildlife and humans alike.

The Turkey Vulture has a collection of special adaptations that allow it to feed on the not-so-savory remains of animals. The most notable of these adaptations has to be their distinct bald head. This silly looking adaptation is common among most vulture species and is important to their scavenger lifestyle. Baldness keeps them from getting bodily fluids from the carrion stuck in their feathers. Having clean feathers is especially important when feeding on carrion because disease causing bacteria can grow on the feathers and eventually infect the bird. Turkey vultures also have incredibly strong stomach acid which destroys the dangerous pathogens that can be found in their food. Their stomach acid is so intense that it even allows them to ingest anthrax! Gross! Amazing!

These large birds can be found just about anywhere but are especially prevalent in areas with cliff faces. They’re abundant in the Stebbins Cold Canyon area, where they can be seen soaring on the updrafts created by the steep ridges. They often live in groups, so if you see one you’re likely to see many more.