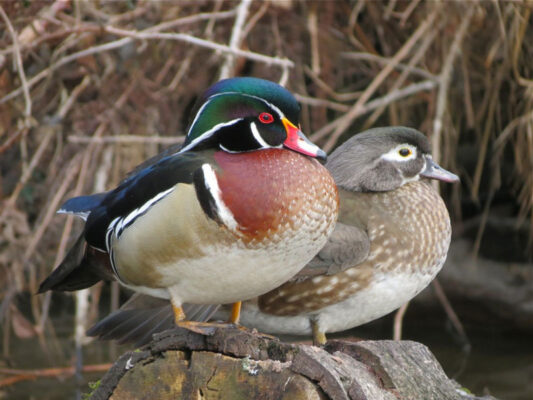 It’s a beautiful day out at the creek. You’re relaxing under the shade of a cottonwood and you hear a rustle above you, what could it be? You look up to see that it’s no other than the breathtaking Wood Duck! This flamboyant, tree dwelling waterfowl can be found throughout most parts of Northern America, but don’t let its prevalence make you think it’s not special!

Tree dwelling isn’t common amongst many duck species, but the Wood Duck isn’t afraid of being different. They build their nests up in trees along the edges of bodies of water, where they lay their eggs and rest. This arboreal lifestyle requires special tools and behaviors. The Wood Duck is equipped with strong claws on its feet which allow it to hold onto the bark and perch on branches. Wood Duck chicks are especially brave, as they have to jump from their nests to the ground below before they can learn to fly. Chicks have been documented jumping from heights of 50 feet without attaining any injuries! Woah!

Don’t believe me? Watch a video for yourself! 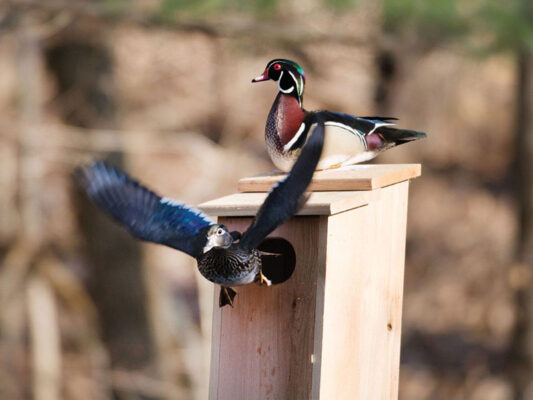 The life of a Wood Duck sounds like a ton of fun, but it hasn’t always been just jumping from trees and perching on branches. Back in the 19th century Wood Duck populations were under intense pressure due to overhunting and habitat loss. The number of Wood Ducks plummeted until hunting was regulated and artificial habitat in the form of nest boxes were created. If you turn your gaze up into the trees along the creek there’s a good chance you’ll see some of these nest boxes. You might even see some chicks getting ready to jump out of them!

Want to catch a glimpse of these stunning birds for yourself? Wood Ducks can often be found near Lake Solano or at any of the pull offs between Lake Solano and the Monticello Dam. They’re relatively easy to spot due to their unique, bright colors. More northern populations often migrate and aren’t year long residents, but our Wood Ducks stay around throughout the year!